Our neighbor’s new boyfriend moved in quietly. Let’s call him, “Brian.” Brian works in construction, and so his schedule and mine are a bit different. I didn’t get a chance to meet him for awhile. Then I finally made his acquaintance.

In my prior blog, I didn’t mention that our neighbor has tattoos from neck to toe. All over. Now Brian moves in and it is tattoo junction. All over. I realize this isn’t unusual at their age, about 30, but what was interesting is when we were talking about work and I mentioned I was a pastor. Brian showed me one of the tattoos going down his arm. It was a bible verse. Aah, something in common…Not the tattoo, but the bible verse.

Brian and I continued to have conversations and he got a chance to meet our twin sons who had just returned from school in San Diego after graduation. They moved back home to finish their teacher credentials at our local university. So, with the boys back home, it was time for back alley basketball! With our schedules, this was usually shooting at night, with only an alley light for illumination.  Soon, Brian came out to watch. He asked if we wanted him to put up a spotlight. We said, “Sure,” and invited him to play. Brian set up a couple of lights and late night alley ball became a regular routine.

As we spent more time together, we got to know each other better. Spending time with me and my “boys”, Brian commented on how cool it was for my sons and me to have such close relationships with each other. We started talking about sharing life and raising kids. This became another a great connector with Brian, as he has a three-year-old daughter who has also become part of our neighborhood. All of us look forward to every other weekend when she is here, as Brian has joint custody. This is something else in we have in common, as my wife watches our two granddaughters, ages 3 and 1, while mom and dad are at work. Still more sharing to go around.

In the meantime, I noticed something else started happening, or, as it were, not happening…our neighbor’s old friends weren’t coming around anymore.

In other words- no more party central! No more “F” bombs!  Actually, we were experiencing quiet weekends. Who would have guessed? Well, quiet, except us loudly talking smack during the killer HORSE games!

Then something else happened. Something I have never experienced before.

It started with our son, Greg, a bit of a handy man, deciding to replace all the doors inside the house. Fine with me, the anti-handy man. Greg also tore out some old book shelves. When he was finished, we put the eight old doors and the bookshelves back in the alley between our two garages. Then we added some bricks and other construction trash we had lying around the garage from another project. We didn’t worry about the mess too much, because Brian had some old stuff he had taken out of their house, as well. So, we had quite the nice little construction trash site going. At least no one could see it. It would take a good couple of hours to clean up all the mess, along with renting a dumpster- well, we were in no hurry…Brian did say, “Maybe we ought to rent a dumpster together.”

A couple of days later, I got up early in the morning and went back to the garage to get milk from the spare refrigerator. I happened to look over the fence, and I was shocked! Everything was gone from the dump site and the whole area was swept clean! I couldn’t believe it. What just happened?

If there had been anything metal, I would have chalked it up to one of the scavenger trucks that go through the alley from time to time to pick up any metal we leave out. But, no one is going to take old doors and shelves and brick. Later that day, I went over to our neighbor’s house and found Brian home.

“Hey, did you clean up all of our stuff out back?”

“Yah, I brought over a dumpster and cleaned everything out of there.”

Now, our stuff alone would have taken a good hour to get it cleaned out. So, I asked the obvious questions.

“Why did you that? Why didn’t you at least come and get one of us to help?”

“No problem,” he said. “That’s what neighbors are for.”

From that point on we became even closer friends. Our conversations became deeper, including Brian even asking about “spiritual stuff,” as he called it.

Then, one day, we went real deep.

Greg and I were helping Brian move some of his things out of the garage. I guess neighbors helping neighbor was getting contagious. We loaded up a huge desk, some shelving, and a bunch of jars.

Joking around, Greg asked, “What do have back here, a meth lab?”

“My dad was a meth dealer,” Brian replied, matter-of-factly…

Build Joy with us. Put logs on the joy in your life and celebrate with us. Paul the Apostle said in Philippians 1:3-5 “I thank 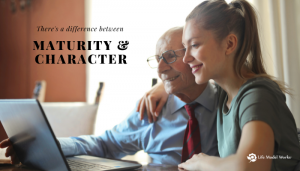 There’s A Difference Between Maturity and Character

Maturity comes from mastering a growing set of relational skills we were meant to learn as we pass through the stages of life. Character is our instantaneous response to our relationships and circumstances.

Be one of the thousands becoming full-brained, wholehearted followers of Jesus. We’ll keep you up-to-date on the latest developments, opportunities, and resources!