I was reading from Genesis 22  – the story of God asking Abraham to sacrifice Isaac – and I noticed that Abraham says, “Here I am” three times in the passage. It stood out to me as the same words Samuel says when he thinks Eli is calling him (1 Samuel 3), and the same words Isaiah uses when God asks for a messenger (Isaiah 6).
They are words of hearing (acknowledging the call), of willingness, of obedient and ready response.
Although these words would have been the most appropriate response when God asked Adam and Eve, “Where are you?” they avoided them. The fact that Adam responded at all (“I heard the sound of you in the garden, and I was afraid because I was naked, and I hid myself”) acknowledges he had heard God, but there was nothing of the willing and obedient in his reaction.
With this context from other parts of Scripture, I began to look more closely at Abraham’s three “Here I am” responses. The first “Here I am” is a simple response to God calling his name: “Abraham!” Abraham does not know what God will ask of him, but he responds promptly and readily as did Samuel and Isaiah (v. 1). Although the request must have been agonizing for Abraham, he leaves on his journey first thing the next morning. There is a sense of submission to a painful request from the Lord. I might even say Abraham makes himself vulnerable before the Lord.
The second “Here I am” comes on the third day of the journey to the mountain of Moriah. As Abraham and Isaac leave the servants behind and finish the last climb themselves, Isaac calls out to Abraham, “My father!” Again, before he knows the request that will be made of him, Abraham responds, “Here I am.” He is open to his son, listening, willing to hear and respond. Isaac is not dumb: “Behold the fire and the wood,” he asks, “but where is the lamb for a burnt offering?” Except for the very raising of the knife, this was probably the most difficult moment for Abraham.
It reveals his absolute dependence on God and his vulnerability – his nakedness – before both God and Isaac. Unprotected, uncontrolled, and without excuses, he acknowledges to his son his hope (confidence) of God providing. Either God will provide another way, as Abraham most certainly (perhaps anxiously) hopes, or he is willing to betray his son. His beloved son. His only heir. The one through whom the promise will come.
That is vulnerability not only to God’s purposes but to the shame and fear of becoming a betrayer. (Even if his betrayal is faithful and right, it is still betrayal.) In its typical ambivalence, scripture gives two parallels. Abraham prefigures God the Father, offering his only son and heir on the mountain. But if Isaac, like Jesus, carries the wood for the sacrifice of himself, then Abraham, like Judas, is also the betrayer, the one who hands over another to death. He stands vulnerable to both loss and guilt, to both obedient sacrifice and fearful shame.
Finally, Abraham responds when the angel of the Lord calls his name: “Abraham! Abraham!” His “Here I am” must by now be shaky and fearful. What else must he endure? But this time he is washed with relief. The message “Do not lay your hand on the boy” releases three days of physical effort, emotional turmoil, and the accompanying stress and adrenaline.
In this third “Here I am,” Abraham’s openness to God, which has been so painful, now allows him to experience the fullness of God’s grace and provision. His relief turns to gratitude, praise, and worship as he sacrifices the provided ram instead of his son.
For everyone, but especially for those who are leaders, Abraham’s openness to God and to Isaac is a pattern for our vulnerability. In saying yes to God, we recognize that the cost of staking everything on God includes social-emotional vulnerability – that the choice to follow Him in radical ways affects our relationships. Opening ourselves to this cost makes us more vulnerable to shame, rejection, anger, fear, and sadness as we realize the ways we hurt others.
We must learn to live in this vulnerability. We must learn to:
Remain relational, walking alongside even those we know will be hurt.
Act like ourselves, maintaining trust and openness even when it’s hard.
Return to joy, finding ways back to a relational connection when we experience strong painful emotions.
Endure hardship well, not defending ourselves or making excuses, not shrinking from the call or the truth or our faith that God will provide.
(For more on these four RARE skills, see the book Rare Leadership.)
It’s possible, but it’s hard, and it requires God’s involvement – which is just the kind of invitation God likes to make. 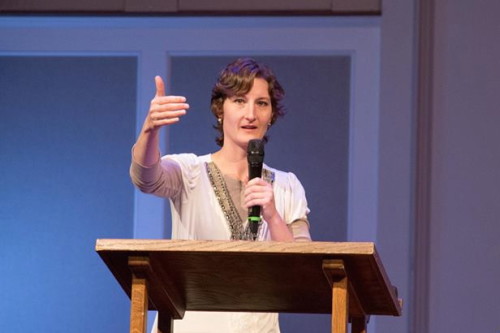 Jessica Handy trains people in Immanuel Prayer for the nonprofit organization Alive and Well, Inc. An educator and pastor, Jessie is passionate about unity and maturity in the church, intergenerational relationships, and real transformation. In two decades of teaching and ministry, Immanuel and the Life Model are the best way she’s found to make her passion a reality. Sign up to receive Alive and Well’s monthly Immanuel Prayer Updates for information about Immanuel-related events, trainings, and resources.
All Posts »
Back to Blog
PrevPreviousThe World Needs What the Life Model Provides
NextAppreciation Changes EverythingNext